You may have heard people talking about tuning their kick drums to improve their songs, both musically and in terms of production ease. This is something which is ignored by many producers, both knowingly and unknowingly. Today I’m going to be discussing the merits of doing so, but also when it isn’t necessary. The issue is contentious in the industry, where some producers swear by tuning kicks, others such as Steve Duda, creator of Xfer and popular synth Serum, believe it is not important. So why do people tune their kick drum, or any sample for that matter?

It all starts with a bit of music theory. If you understand a bit about this, feel free to skip ahead, if not, read on!

Music is formed by many different sounds, all of which have a relationship with each other. Different musical pitches relate to each other in different ways and some sound good, eg chords, others don’t.

Now, the types of sound that are most liable to clash are the ones which are long enough to properly determine the pitch. Two piano notes, for example, are very easy to identify and judge if their relationship is nice (harmonic), or off (dissonant). Sounds which are very quick, such as drumsticks clicking together are often too brief to identify the notes and hear a clash, and so immediately, we have an order of priority.

The main melodic elements of a song, the piano, the synths, the vocals, are in most cases required to be harmonically pleasing to the ear. Drums and percussive elements, less so, due to their brevity. This is why many people can get away with not tuning their drums, especially in live music, where the songs may be in many different key signatures yet the studio drum kit remains the same for each track.

So let’s look at where tuned kicks are most important, and work our way backwards. You will be able to decide for yourself where your own style of music fits in, and the best course of action.

“I always tune my kick to the key of the song. The kick, when in tune and in mono, forms the spine of my music, from which all the other parts extend out of. With a strong spine, all the other parts have a solid foundation to rest on and stem from.”

In trap music, there is one defining element, the 808 kick. The TR-808 was a drum machine built in 1980 by Roland, and was one of the most revolutionary instruments ever made. It allowed musicians to create their own drum sounds and sequence them.

Due to the broad range of sounds available, the resulting drum options were huge. The kick sounds were able to be quick and punchy, or long drawn out booms at low frequencies. It is these booms, that became popular in hip-hop and then trap music.

The anatomy of the 808-style kick (and many of its successors) was a pitch sweep, starting at high frequency then sweeping down to a sustained bass note which formed the fundamental, or as we now know it, the trap bass.

This can be roughly mimicked in a VST by using a pitch envelope on an oscillator. The 808 uses an impulse, a brief sound, passed through a self-resonating bandpass filter to create the sweep.

The reason for the pitch sweep was to mimic the clicky, punchy sound of a kick drum on impact, and the sweep down was normally too fast to identify. If you slowed down the sweep, however, you got a distinctive laser “pyoom” sound.

The fast sweep, of course, covers many frequencies, and so in itself cannot be tuned, but the fundamental note, the boom at the end could. This meant that for longer kick sounds, it begins to clash with any bass notes in the song.

Try using a sine wave in a synth and pressing two keys next to each other, or alternatively, set one oscillator a semitone above the other and press a key. 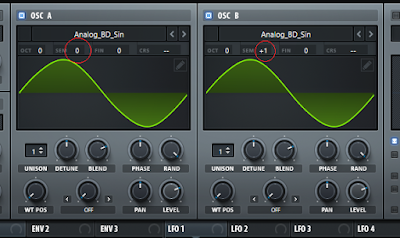 You will hear the note wavering in volume as the waves play out of tune, and constructively/destructively phase each other.

At higher frequencies, it sounds like a phone ringing, at lower frequencies, it’s more like a slow wobble. This low-frequency tuning problem can cause havoc in your mix, as the kick and bass notes add and subtract from each other. As an aside, it is this wobbling of sound which allows you to tune your acoustic instruments. Two notes at 3Hz out, will cause 3 “wobbles” per second.

This will not be a problem if your kick is short, but for the longer notes, it can ruin a mix. In trap music, there is normally no bassline going over the kicks, but there is another defining feature, the kick sounds normally play the bassline themselves, with the kicks hitting at different pitches as the drop progresses.

Another point to make is that bass notes, whether from a kick, a synth, or a bass guitar, are not independent of the melodies in the octaves above. Their relationship with the higher pitched instruments is essential for a good harmony across octaves in a song. This is why a bass guitar player must play in the same key as a guitarist.

So for trap at least, we can safely say that most cases require a kick that is tuned to the key of the song.

Let’s move onto a genre with a slightly less elongated kick. Techno. In techno music, we don’t tend to draw out the kicks for multiple beats, but the boom is still pronounced and will often last the whole beat. Techno can use the kicks as the sole sub-frequency element, or it can combine kicks with a sub. It is particularly vital to keep your kick drums in the same key as your sub-bass synth, especially if the kicks last the full beat.

For techno  tracks where the kick is the sole sub-frequency element, you have a bit of room to play about, particularly if the is sparse harmonic content, eg little in the way of melody.

“Its one of my pet peeves, I see and hear it all the time, people talking about tuning kick drums and they’re calling up a 909 or some sound which is essentially a frequency sweep. The pitch of such a drum is completely subjective to the listener. In such a case- if you want to tune it where it sounds more in-key to you, that’s fine, but it is really an illusion.”

– Steve Duda, best known as the creator of Xfer Serum.

You could argue that trap and techno are somewhat unique in their implementation of the kick drum, where it can be used as both a percussive and a harmonic instrument. Many other genres don’t sustain the kick note for as long and so it becomes decreasingly important. Let’s look through some more.

Here is an example of an 808 kick in a techno beat, you can see that the fundamental frequency extends for the whole beat and there is sound all the way up to the next kick.

House music has many subgenres and so it is important not to place a blanket rule, many bigroom tracks have a techno-like kick, enhanced with distortion, in this case, not only do you have a long sound, but you also have the kick’s harmonic frequencies enhanced up through the mid-range of the song, in this instance tuning the kick is important. Other styles of house have a much punchier kick where it doesn’t matter, and may even be beneficial to stray from the key to make it stand out.

In trance music, the higher tempo normally means that there is less time for the kick to sustain – 140bpm has roughly 0.43s between each beat. This means that many of the kicks heard are quite short and supplemented by rolling basslines

A popular technique used in styles such as this, especially if the kicks still retain a bit of boom (though thump is a more adequate word here), is to tune the kicks a fifth above the root note. This allows for the kicks to remain in tune with the song while leaving the bass synth frequencies some room.

For most other genres, the kick is less important for low-frequency weight and instead is present for punch. The punch phase of a kick drum is the frequency sweep down and so the boom phase is rarely that long. Genres such as drum and bass and breakbeat often present kicks so punchy that trying to tune them would be pointless, as the difference it makes is negligible.

You can see here, a live studio kick drum. The waveform is a bit more complex than the 808, especially at the punch phase. You will also see much less fundamental frequency extending to the next beat, This makes it much easier to implement in a track, even if it is not tuned, as it is shorter and has less extended frequencies which could clash with the bass of the track.

Arguably the most important factor of all when deciding if your kick needs tuning is this:

The main element of the kick is the punch, something which can be lost through manipulation of the sample via transposing it to the correct key. If you have a kick sample which you are set on, and that works for the song, keep it that way. All the music theory in the world is there as a guide, and it doesn’t account for everything. Sometimes, due to physics and numerous other factors, and out of tune kick will sit perfectly in the mix. If that is the case, trying to tune it will ruin its qualities and may make it inferior to the original. That’s not to say don’t ever tune it, in fact it won’t hurt to choose a kick sample which is already in key with your track, and that has the right punch.
So the best way to go about it is to listen on good speakers or headphones to the mix. Play about with tuning, but don’t commit to it, because sometimes it may not be the best creative decision. Hopefully, this feature has shown you what to look out for, and what to consider, but the ultimate decision is down to you, the producer.

This site uses Akismet to reduce spam. Learn how your comment data is processed.